Instruments For Amateurs And Professionals

The instrument that falls under the woodwind family were previously made of wood. So that was how the name was gotten. Presently, woodwind instruments are made of wood, plastic, metal, or a mixture of some materials.

You can play these instruments by blowing air through the mouthpiece and closing or opening the holes with your finger to alter the pitch.

The Clarinet makes use of the reed that is made of one piece of wood. When it comes to the stringed instrument, the smaller woodwinds play maximum pitches while the larger ones play lower musical notes. The woodwind set of instruments comprises six major instruments. 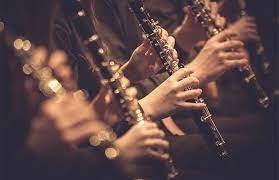 The oldest of all instruments that give pitched sound is the flute. Flutes were originally made from wood or clay. The present-day flute is made of gold, platinum, or silver. You can play the flute by grabbing it sideways with your two hands and blowing air into it across a hole. The fingers tend to open and close the keys when they are altered.

The Clarinet is also similar to the Oboe. It is often mistaken for the Oboe. The difference between these two is the mouthpiece. Also, while the Oboe uses two reeds, the Clarinet uses only one reed.

The Clarinet is being played just the way the Oboe is being played. By holding it upright and then blowing air into it through the reed and making use of your two hands to alter the pitch by closing and opening the keys with your fingers.

There are two forms of Clarinet;

The length of the Bass Clarinet enables it to play some of the lowest notes during any musical concert or orchestration. The bass clarinet is said to be the grandfather of the Clarinet family.

It is so large that both the bottom and the top are folded and bent to enable musicians to hold and play it.

The E-flat Clarinet is half the length and size of a standard clarinet. As a result of its shorter size, it can play higher notes.

Bassoons are known to be instruments made of wood with a lot of keys. The bassoons come with a bent pipe that allows musicians to play them conveniently and without stress.

The bassoons are designed to play lower harmonies; you can play them by holding them upright d blowing them through the reed. When it is done, the air goes down the tube and turns through the tube.

The piccolo is the shorter version of the flute. In the Italian language, the piccolo is being interpreted as small. As small as this instrument is, it gives the highest notes of all the woodwind instruments.

The contrabassoon is regarded as the grandfather of the wind instrument. It is bigger and larger than the normal bassoon. This type of wind instrument requires a lot of breath to make sound come out of it. The instrument plays the lowest note in any musical performance or orchestra.

The Oboe comes with metal keys that cover the hole. Being a woodwind instrument, it has a mouthpiece that uses two reeds that vibrate when blown. When the reed vibrates, it gives room for the air inside the Oboe to move, thereby forming sound.

The Oboe is played by holding it straight, then blowing through the double-reed in the mouth, then using the two hands to press the keys down to open and close the holes to alter the pitch.

The English Horn is similar to the Oboe because it uses two reeds, and it is played in the same way the Oboe is played. One of the slight distinctiveness between the two is that the Oboe tube is wider than the English Horn.

Also, the English Horn is longer than the Oboe. As a result of the fact that the English Horn is larger, it has a minimum pitch range compared with the Oboe. However, just like the majority of the other woodwind instruments, you can use your two hands to press on the key to close and open the holes to alter the pitch.

The recorder is one of her simplest and easiest woodwind instruments to play. The recorder was a very common instrument played in Europe between the 14th venture to the 18th century. Aside from the fact that you can play them in the absence of any backup instrument, they can also be played in a musical orchestration where other types of recorders are used.

The recorder is being categorized under the musical instrument known as Internal Duct Flutes. These flutes come with mouthpieces. The distinctiveness between the internal duct flutes and the recorder is the number of their holes.

The Harmonica is one of the handy woodwind instruments that can be placed into the pocket even with the presence of the case. But, unfortunately, it is almost impossible to know the particular musical instrument discovered or invented.

The bagpipe comprises two-note pipes, a blowpipe, an animal skin bag, and a chanter. A musical player uses the chanter to play the notes on the instruments. The bagpipes are very difficult, and it takes a very long time for the newbies to get used to them.

The trumpets are commonly used for jazz bands. They are different types of trumpets that are being sold in the market. You can purchase them based on the quality of their sound, sizes, and shape.

The saxophone comes with brass construction and numerous holes in the instrument’s body. The holes of the saxophone are closed using the keys while blowing through the mouthpiece.

The Alto saxophone is mostly recommended for intermediate players. However, it is said to be the best option for beginners and professionals.

The tuba is one of the largest wind instruments in the brasswind family. Therefore, it does not need the energy required when blowing a trumpet. However, the tuba is much heavier than all other woodwind instruments. For this reason, it is placed on the ground when it is being played.

If you are playing the musical instrument for the first time, you may not be able to tell the distinctiveness between the trumpet and the cornet because they look similar to one another. In addition, the Clarinet and the trumpet are both b flat instruments.

The Shawn can be found in the period between the 13thand 17th centuries. It is a free-reed instrument. Unfortunately, this woodwind instrument is hardly found in many places worldwide.

The trombone design has what makes up the trumpet. You can play it by blowing air through the instrument and sliding a part of the instrument back and forth to control its pitch.

The Trombone was formerly referred to as the “Sackbut” when they first used it in the early 1400s. The name was later called the “Trombone in the 1700s.

Besides using this method, there is another way of controlling the sound of the French Horn. One of them is how they blow into the instrument. In the majority of the professional gathering, the French Horn is referred to as the Horn.

It is a double reed wood instrument that falls under the category of the oboe instrument. This type of woodwind instrument is also known as the English Horn.

How this instrument is fingered is similar to that of the oboe instrument. The only difference is that the Cor Anglais gives a very low or minimum pitch.